The Antarctic ice sheets are melting faster than previously thought, according to last week’s news articles. This century the sea level will rise an extra meter. Reason to panic? 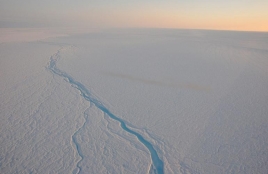 The news is based on a publication of two American climate scientists in Nature, who worked with a new model. Van den Broeke: “Although they  identified processes that can have a great influence on the sea level, the scientists do emphasise that their findings should not be interpreted as a prediction.”