Forest fires cause high CO2 emissions and so contribute to a rise in atmospheric temperature. ‘Where and when forest fires develop also depends on plant traits,’ says PhD candidate Luke Blauw of the VU University Amsterdam. ‘I am trying to find out which traits are most important in this respect.’ 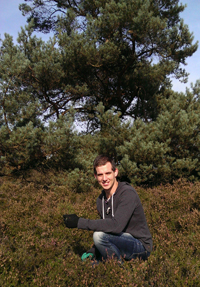 Just like dead materials, some plants and trees are more flammable than others. That depends on certain properties of the plants, including their leaf size and structure, and their location. ‘These properties are called plant traits,’ says Luke, who is studying which traits increase plants’ susceptibility to fires in tundra and subarctic regions.

Extra CO2
Fires are extremely harmful to the environment. They not only destroy animal habitats, but also result in very high CO2 emissions. ‘CO2 warms the atmosphere and so causes global warming,’ explains Luke. ‘Global warming in turn results in longer summers and a higher incidence of droughts, and so increases fire hazards. In effect, it creates a positive feedback loop.’

‘I am studying tundra fires and fires in subarctic regions,’ Luke goes on. ‘These regions are extremely cold and the soil consists of a thick layer of permafrost, in which large amounts of CO2 are stored. Fires in these regions are especially harmful because the heat of the fires thaws the permafrost and releases a lot of additional CO2.’

Quantifiable properties
‘Plant traits are a plant’s quantifiable properties,’ Luke explains. ‘A list of properties indicates a plant’s flammability, but should also include information on the surrounding plants’ flammability. A highly flammable plant burns up rapidly and soon extinguishes. That makes the chances of a real forest fire developing very slim. But if such a plant is surrounded by plants that take a while to ignite, but then keep on burning for a long time, the entire system will be very flammable indeed.’

Square metres
‘Eventually we want to link our research to remote sensing,’ says Luke. ‘Looking at an area on satellite images and aerial photographs is much more efficient than walking through a forest. The images form a detection system that enables us to determine an area’s aridity and even identify plant species and plant traits. At the moment, the resolution of aerial photographs is still fairly low, but in time this will improve and we will eventually be able to determine the plant assemblage for a specific square metre.’

Tipping points
One of the conclusions to be expected from Luke’s research is how much CO2 is released by tundra fires and fires in subarctic regions. Luke is conducting research for the Netherlands Earth System Science Centre (NESSC) into one of the feedback systems that is important for predicting tipping points, i.e. points in time when the climate changes completely. Although a rise in atmospheric CO2 concentration will cause a rise in temperature, we do not yet know by how much this concentration will increase. Luke’s research will help clarify this.