NESSC research has an extensive range, from the freezing poles to the heat of the African tropics. PhD candidate Loes van Bree’s research involves her comparing the current global warming with that following the last ice age. She is collecting her research data from a deep crater lake in Africa. 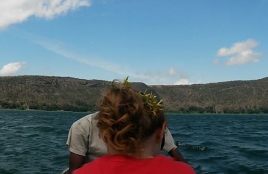 Lake Challa, a deep clear-blue crater lake, is situated at the heart of the East African tropics on the border of Tanzania and Kenya. ‘My lake’, as Loes van Bree lovingly calls Lake Challa, contains a lot of information on the climate over the past quarter of a million years. Van Bree started her PhD research at Utrecht University’s Faculty of Geosciences in spring 2014.

It is not the first time that Van Bree has done research at Lake Challa. ‘I previously did a study there for NIOZ’, she says. ‘Then, we were only interested in the period from the Last Glacial Maximum, the last ice age, until now, spanning some 25 thousand years in total. But that research didn’t enable us to compare our findings with another period of global warming.’

‘We need data covering a quarter of a million years in order to study the last two ice ages’ says Van Bree. ‘That’s still a very limited period on a geological scale, but then at least we can study two periods of climate change during the transition from an ice age to a warmer period, around the equator.’ 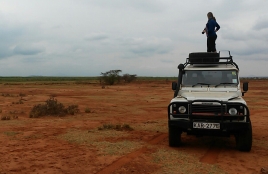 ‘In order to look so far back in time, our international team of scientists is planning to drill and take a core down to a depth of two hundred metres in 2016. This type of drilling is usually done from a large ship, but such a ship can’t get into a lake. As Lake Challa is a crater lake and therefore has very steep sides and very narrow banks, it’s going to be pretty complicated.’

Van Bree travelled to Africa in September to visit the lake. ‘A local Kenyan is taking water samples every month, and I can analyse these samples in the Netherlands,’ she says. However, she would prefer to study a drill core. ‘Because oxygen levels in the lake are very low, the bottom sediments are particularly well preserved. A core taken from these sediments contains nice parallel layers, two for each year, and these provide a continuous timeline going back around 250 thousand years.’

‘I might already have finished my PhD by the time the core arrives in the Netherlands’, concludes Van Bree. ‘Although I can wrap up my research without the core, that would really be a pity. I’d much rather get hold of that core first.’