Exciting times for some of our NESSC colleagues: a new isotope device has been installed at the IMAU (Institute for Marine and Atmospheric research Utrecht). The instrument, a ThermoFisher MAT 253 Ultra developed in California, is a mass spectrometer which measures the ratio of different isotopes (atoms of the same element but with different mass) extremely accurately. 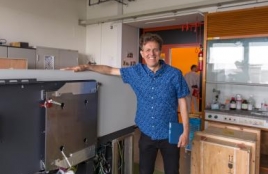 The isotope device has various applications. Molecules that nearly have the same mass – but not exactly the same, due to the isotopes – can be separated from one another using electrical and magnetic fields. The instrument is extremely sensitive thanks to the use of detectors. This combination of separating power and detection enables the device to measure multiple heavy isotopes. Until now, it was only possible to measure molecules with one heavy isotope.

By conducting measurements on the molecules in this manner, it is possible to determine their formation temperature, for example. This is useful for climate and geological research. Röckmann’s research group is particularly interested in using the new isotope signals in atmospheric research. The origin of greenhouse gases and other pollutants in the atmosphere can now be better determined; gases such as carbon dioxide, methane, nitrous oxide, ozone, nitrogen and carbon monoxide. Röckmann: “We want to gain more insight into gas cycles, such as the production and degradation processes. From an international perspective this is important research, especially considering additional insight could help us to reduce the emission of greenhouse gases.”

Within NESSC, the device will be used to develop new proxies for temperatures and changes in greenhouse gas origins in the past and present. Specifically, methane sources in th 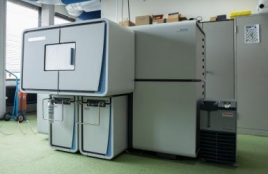 e Arctic provide an interesting research object, since they possibly contribute to tipping points. One NESSC project will be dedicated to researching those methane sources, based on traditional and new clumped isotope signatures. Ultimately, these methods can also be applied to study samples within other NESSC projects on methane.

The ThermoFisher MAT Ultra received a large amount of funding from NESSC, supplemented with funding from Utrecht University.