The first results of NESSC’s PhD-researchers are arriving with publications in high ranking journals. We are very proud of them! Below you find a short description of some of the recently published findings:

The Pliocene is an extremely interesting interval because of its suitability as an analogue of the near future. Emily’s paper presents the first terrestrial temperature record for north western Europe using lipid biomarkers (branched GDGTs), that will provide valuable input data for climate models. Furthermore, the novel method proposed therein to ‘separate’ terrestrial and marine branched GDGTs in marine sediments holds many exciting opportunities for branched GDGT paleoclimate community. The paper was published in Earth and Planetary Science Letters on May 15th.

Microorganisms are the drivers of biogeochemical methane and nitrogen cycles on Earth. Several microbes were predicted to exist based on thermodynamic calculations long before they were actually discovered. Dedicated enrichment procedures, metagenomic sequencing and single-cell technologies have recently enabled the identification of several new microbes. NESSC researchers Michiel in ‘t Zandt, Anniek de Jong, Caroline Slomp and Mike Jetten from Utrecht and Radboud University, systematically reviewed the literature of their own and other’s findings, and made a comprehensive overview of these so-called most-wanted spookmicrobes that oxidize methane and ammonia without air. The review was published in FEMS Microbiology Ecology on April 10th. In the last NESSC Christmas lecture, Mike Jetten presented these findings to the general public. Michiel in ‘t Zandt and Anniek de Jong made a short movie on the important role of microbes on our climate.

Foraminifera are unicellular marine organisms that secrete a tiny calcite shell, providing an important tool to reconstruct seawater conditions. Until recently, there is no direct ‘proxy’ to reconstruct seawater salinity, which is necessary to study changes in ocean circulation, the hydrological cycle and sea level of the past. We cultured two species of foraminifera over a salinity range and show that the incorporation of sodium in the calcite (CaCO32-) shells increases with increasing salinity, and show that Na occurs in elevated bands in the shell wall. These results enhance our understanding behind the mechanisms of this novel salinity proxy. Emee’s research article was published in Biogeosciences on the 16th of April. 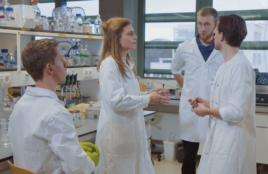 Due to climate change, previously frozen Arctic soils are already melting. These Arctic soils store large amounts of organic matter that upon thaw are degraded by microorganisms. This may lead to the production of more greenhouse gases like methane (CH4) and carbon dioxide (CO2). In a collaboration between Radboud University and Free University of Amsterdam, Anniek de Jong and Michiel in ‘t Zandt studied the microbial production and consumption of methane under climate warming scenarios. They could show that the microbes adapted quickly to the temperature increase with a high dependency on substrate availability. These observations are important for future prediction of methane emissions in the High Arctic region. The joint NESSC paper was published in Environmental Microbiology on July 2nd. A short movie clip on the consequences of microbial methane production in the Arctic can be found on the website of Tipping Point Ahead.