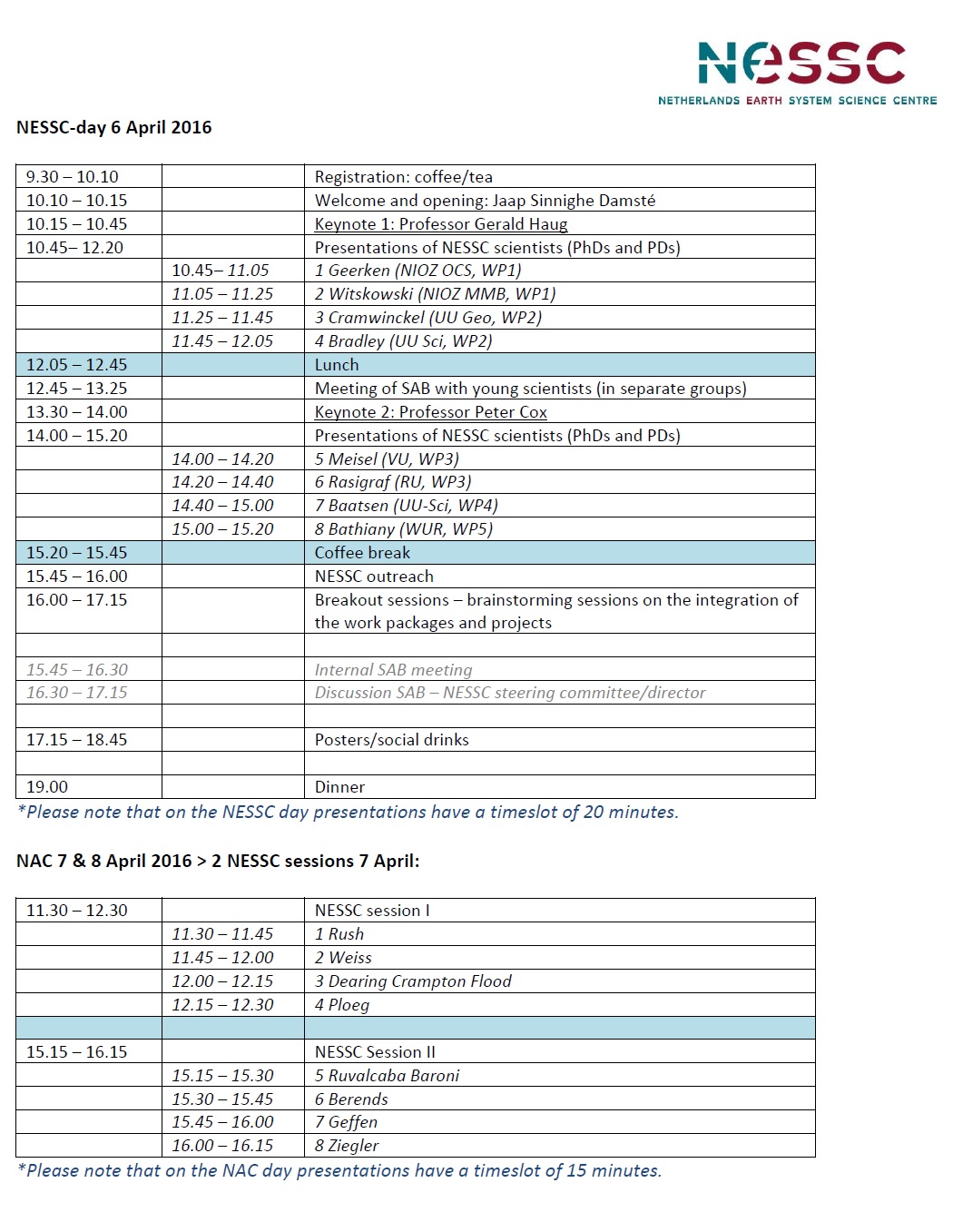 This is the final schedule for the NESSC-NAC program for April 6-7.

The polar oceans and Atmospheric CO2

We argue for a pervasive link between cold climates and polar ocean stratification. In both the Subarctic North Pacific and the Antarctic Zone of the Southern Ocean, ice ages were marked by low productivity. The accumulated evidence from sediment cores points to an increase in density stratification that reduced the supply of nutrients from the ocean interior into the sunlit surface in both of these regions. The last ice age was associated with stratification of the Antarctic and the subarctic North Pacific and it can be argued that the well-known glacial decrease in North Atlantic Deep Water indicates a similar stratification of the North Atlantic. This link also applies to longer time scales, including the onset of extensive northern hemisphere glaciation 2.7 million years ago, which was concurrent with stratification of the Subarctic North Pacific and the Southern Ocean. The generality of the cooling/stratification connection calls for a general mechanism. Such a mechanism is provided by the non-linear relationship between the temperature of seawater and its density: cooling of the ocean will decrease the role that temperature plays in the density structure of the polar water column, allowing the freshwater cap that is always present in polar regions to cause greater density stratification, allowing the freshwater cap to intensify further. Nutrient-rich polar ocean regions such as the Antarctic and the Subarctic Pacific represent a “leak” in the biological pump, allowing deeply sequestered carbon dioxide to escape back into the atmosphere, and stratification of these regions largely stops that leak. Thus, the link between climate cooling and the stratification of nutrient-rich polar regions represents a positive feedback in the climate system, raising atmospheric carbon dioxide during warm periods and reducing it during cold periods.

Earth System Models (ESMs) are designed to project changes in the climate-carbon cycle system over the coming centuries. However, ESMs still suffer from a significant timescale problem – we need constraints on the huge range of projected changes in the climate-carbon system over the next century, but the contemporary observational data we have relates to much shorter timescales. One way around this problem is to look for relationships between the more extensive observations of short-term variability and the longer-term sensitivity of the ES to anthropogenic forcing. According to the Fluctuation-Dissipation Theorem (FDT), such relationships should be common in a large-class of systems including the ES (Leith, 1975). In principle it should even be possible to get good estimates of ES sensitivities to external forcing purely by analysing the temporal correlations evident in climate observations – unfortunately this typically requires a prohibitively long time-series of observations.

An alternative approach to utilising the constraints embodied in short-term variability relies on “Emergent Constraints”. An Emergent Constraint is a relationship between some ES sensitivity to anthropogenic forcing and an observable feature of the ES. We call it emergent because it emerges from the ensemble of ESMs, and it is described as a constraint because it enables an observation to constrain the estimate of the sensitivity in the real world. As examples, we will describe emergent constraints on the sensitivity of tropical land-carbon storage to warming, and on CO2-fertilization of photosynthesis in mid and high-latitude vegetation.