This summer, NESSC colleague Margot Cramwinckel took off on a one-week field work to the southern part of Russia, north of Georgia.

“Together with researchers of the Paleomagnetic Laboratory (Utrecht) and a handful of Russian geologists we drilled for rock samples along the outcrops of the Belaya river, moving about by Jeep and rubber boat. While the Netherlands was suffering under a spectacular heat wave, we were lucky to enjoy cool temperatures of about 35 degrees Celsius during our trip.

The Belaya river flows northwards from the Caucasus Mountains, cutting through old layers of rock of tens of millions of years old. This includes old seafloor of about 40 million years old, a period of time during which the Earth underwent a slow global warming, which is the topic of my PhD research. We’d like to find out how warm the sea surface exactly became, and what the effects were on biology and chemistry of the oceans. 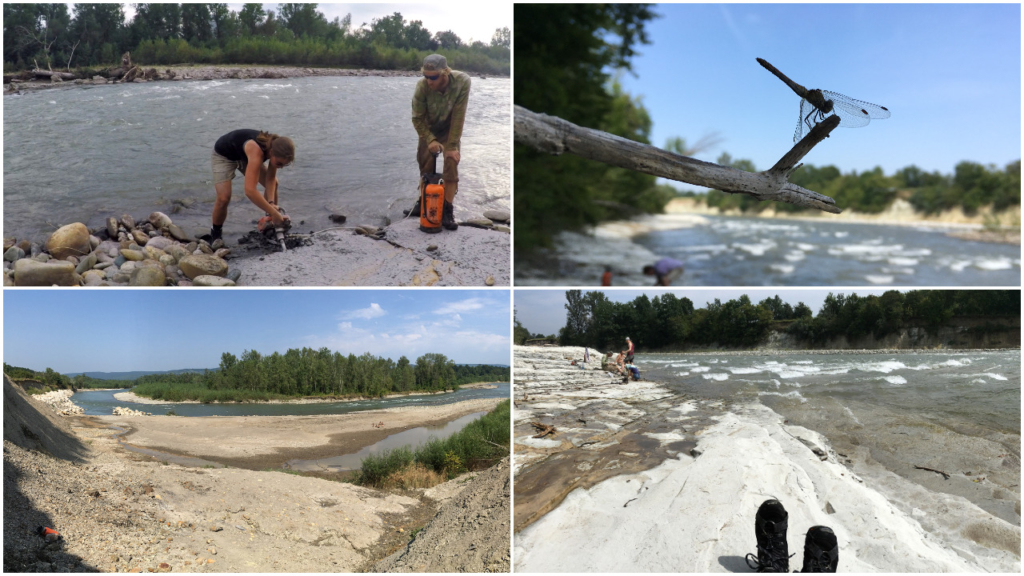 Under the soothing sound of fighter jets flying overhead, we drilled at each site a core every 10 centimetres, wrapped it lovingly in tin foil and labelled it. This way, we collected in total about 40 kilograms of rock to take back by plane (not fighter jet) to the Netherlands. After each long day in the field, we headed back to our home base in Kamennomostsky, where we enjoyed pre-dinner snacks consisting of local beer and chechil (smoked cheese, tastes like chicken – obviously).

The next steps in this project consist of taking the 40 kilograms of samples into the lab and subjecting the sediment to all kinds of analyses, to try figuring out what exactly happened forty million years ago. This will include measuring magnetic minerals to find shifts in Earth’s magnetic field, analysing the chemical composition of the sediments to reconstruct what happened to the climate, and looking at microscopically small fossils to see how they responded to climate change.”