In case you think this is going to be just another blog about how gorgeous Hawaiʻi’s capitol Honolulu is, then you are most definitely right! But if you thought it will be a boring scientist’s report on a conference that was held there few weeks ago, I hope I can prove you wrong. 🙂

First of, the backdrops of this science loving gathering. The Goldschmidt conference, an international conference on geochemistry and related subjects, is organized by the Geochemical Society and the European Association of Geochemistry. It was named after a Norwegian mineralogist, Victor Goldschmidt, who is considered to be the founder of modern geochemistry. This was the first time I attended this conference – I’ve been wanting to go but was unable to due to a global issue that shall not be named as it took too much space in the media already…

How big was this conference?
This year the conference was organised as a hybrid event. I know we’ve all dealt with our fair share of those in recent years, so I was apprehensive what to expect. The questions that first came to mind were:

* Will there be long waits until people who were giving their talks remotely join?
* Will there be awkward situations when people online just don’t show up, if for no other reason, than simply because of time differences (Hawaiʻi is 12hours behind CET)?
* Will the technology fail us that will inevitably lead to lots of frozen screens, butchered sentences that nobody can follow and mangled slides?

These were reasonable concerns as we were told by the organizers at the opening day that almost 3000 people were attending, around half of them remotely. This is still a couple of thousand people shy from what the numbers were in the past, back when we all had a 3D presence.
Goldschmidt ranks as one of bigger conferences in the geoscience’s world, but I can happily say that none of the beforementioned concerns came to be. The entire organization seemed to be a well-oiled machine, the schedule was strictly adhered to, the session chairs knew what they were doing and that was the case for both invited speaker sessions and flash talks that poster presenters needed to give.

What were health safety measures?
The conference was held in Honolulu’s Convention Center which deserves a blog in its own right if you ask me. The building is spacious, open to airflow, with small courtyards, waterfalls and amazing views, perfect when chilling between the sessions and enjoying lunch on the staircase.
Given that everything is already architecturally designed to be spaced out, there was no problem for people to mingle without felling uncomfortable. Masks were also a mandatory part of all closed-door events, such as talk and poster sessions.

What was the programme?
It is customary that big scale conferences offer numerous and very varied themes. Goldschmidt is known for encompassing every aspect of research concerning Earth’s lithosphere, scary things like volcanoes and magmatism, not to forget the geobiosphere, environmental geochemistry and climate change. Ah yes, all of this is not only limited to Earth (although that one holds a special interest in most people’s hearts) but also offers insight into research of other planets and planetary bodies (such as Ryugu asteroid).

This year, the participants were able to follow exciting new studies from 15 different themes. For the sake of space and time, I’ll limit myself to elaborate on only one of them, theme 15: ‘Geology through a cultural lens – Diverse perspectives on the natural world’. This theme covered talks from invited speakers that are most concisely put in 5 terms, one a day: Earth, Fire, Life cycles, Water, and Protecting the Sky. This unconventional theme, which unfortunately had a low attendance (at least in person), was a true refreshment at the end of every day’s program, much due to Dr. Adina Paytan who has done a great job at chairing it. Fresh takes on how we conceptualize research studies could be heard from native Hawaiian researchers.

Typically, Goldschmidt is preceded and followed by specific field trips. This time they were mostly focused on coastal geology and volcanism of Oʻahu island. For talks, there were morning and afternoon sessions with plenary sessions during the midday and poster sessions in the evening.
An additional presentation style was a ‘flash talk’: a five minutes talk given by poster presenters both in person and remote. The tight time format and aforementioned time zone differences led sometimes to funny situations with a no-show of online people and the chairman would just flip through the uploaded slides while we all sat in silence. Some funny remarks would ensue as you can imagine.

What to expect outside the conference?
When I try to convey to my friends what my impressions of Oʻahu have been, words sometimes even fail in my own language (Serbian).
I can wholeheartedly recommend, even if you only have time in Honolulu or if you are lucky enough to skip around the island, to just wander around and absorb the colours and smells of plant life, ocean and food. Honolulu is a great and very urban city but I’d be remiss if I didn’t invite you to go climb at least a couple of craters while you’re at it. They are the birthplace of Hawaiʻi after all, and the geoscientist in you will be eternally grateful. Be advised, though: you might find yourself cursing whoever came up with such a suggestion as some of those climbs are not a ‘walk in the park’. 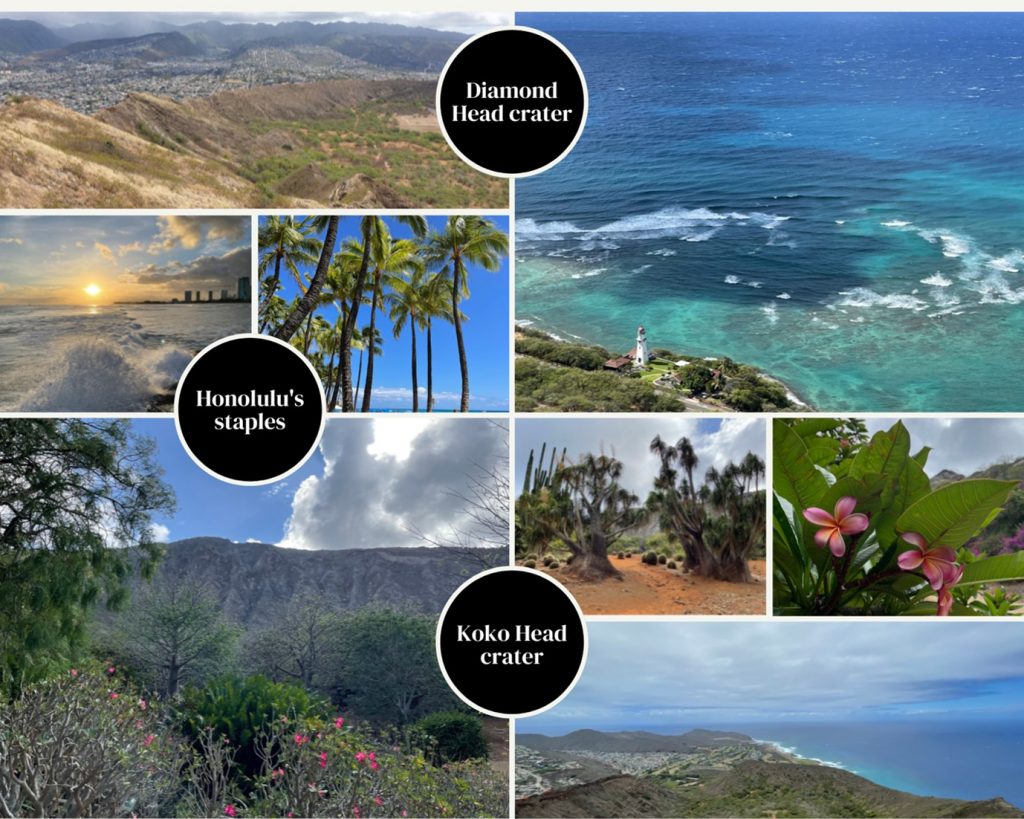