NESSC colleague Professor Michiel van den Broeke was interviewed by AD on the presence – or better absence – of sea ice in the Arctic region in the near future.

Measurements of the American National Snow and Ice Data Center (NSIDC) show that the maximum sea ice extent in the North Polar region has never been as low since observations started in the early 1970’s. 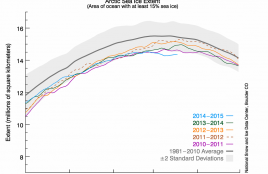 The graph shows that the maximum sea ice extent in the Arctic region is typically reached in March, and that this years’ measurements are well below the measured average of the past 30 years. The summer (September) sea ice extent decreases even more rapidly: at the present of decline, it is expected that around 2070 the Arctic will be sea ice free in late summer.

Sea ice extent cannot be correlated 1:1 with the volume of the sea ice, since sea ice thickness cannot yet be accurately measured using remote sensing techniques. Therefore thickness measurements from robotic submarines are essential to assess changes in volume and make future predictions.